OK so how many times do you have a client come to you and say I would like to have an iOS version AND an Android version of an app built. What do you mean it’s going to take twice as long? If you already built it once why do you need to build it again? Any situation you find yourself in where you want one codebase to generate two native apps (no Xamarin and no HTML5) Dart & the Flutter SDK are here to help.

Dart and the Flutter SDK

Google unveiled it’s Flutter SDK for Dart in grand fashion at this year’s I/O. If you didn’t get a chance to watch that session online I strongly encourage you to do so.

So what is Flutter?

“Flutter is a new mobile app SDK to help developers and designers build modern mobile apps for iOS and Android.”

Dart is a popular language at Google. Flutter lets you write Dart code that builds mobile apps for the iOS & Android platforms. I’ve been writing Flutter with the IntelliJ IDEA IDE. However you can also use IntelliJ WebStorm. You’ll need plugins for Dart and for Flutter. They’re pretty easy to install too. From your IDE, open your plugin preferences (Preferences > Plugins on macOS, File > Settings > Plugins on Windows & Linux) and search for & install the Flutter & Dart plugins.

Flutter provides a TON of widgets to let you build your app UI. And not just it’s own widget designs. For iOS specific widgets (like switches, spinners, etc.) there are CupertinoWidgets. For the Material Design inspired Google UI widgets you’ve got MountainView widgets. These widgets match the same widgets you’d get with those platforms.

Flutter widgets are built using a functional-reactive framework, which takes inspiration from React. When you build your UI with Flutter it’s entirely built out of widgets. A widget could be a Button or a TextView or all sort of UI components that you’re probably already familiar with. Widgets can have a child widget or collection of children widgets. The premise is that you have one root widget and build from there.

Widgets have configuration and state. A widget’s state helps determine how it could look to the user. For example, you may have a Table widget that displays a list of items sourced from a REST call. When your widget loads you have a list of zero (0) items you may want to show a CupertinoActivityIndicator. Then when the items load you can call setState to update your widget’s state and switch to a Table widget. When a widget’s state changes, the widget is rebuilt and the changes are then applied. Note that it’s just the changes and not the entire UI. That’s how the Hot Reload works so quickly. More on that later though.

So let’s create our first Flutter app shall we. Once you’ve gone through all the steps outlined in the Flutter Installation & Setup documentation, open up a terminal or command line prompt. From there, assuming you have Flutter on your path, you can enter the following command to create your first Flutter app:

Changing your current directory to the one you’ve just created firstflutterapp you can see everything it’s created for you. Your Android project & your iOS project. If you’re familiar with that development then the files you see in the screenshot below should look familiar to you. 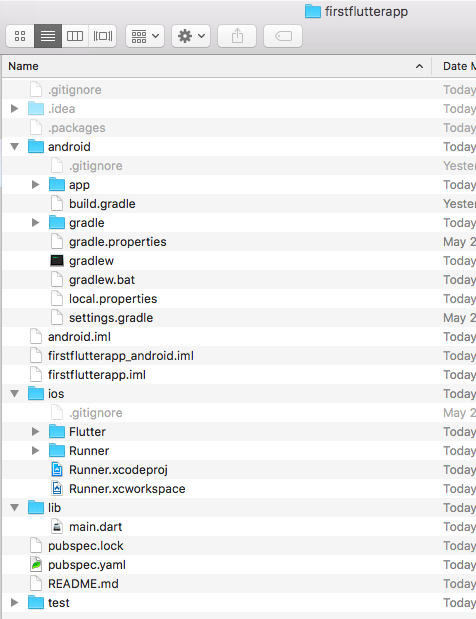 Notice the lib folder? That’s all the Dart+Flutter code. That one file is all you’ll need to generate the following sample starter app. The starter project generates a button tap counter app and the code for this is below that. 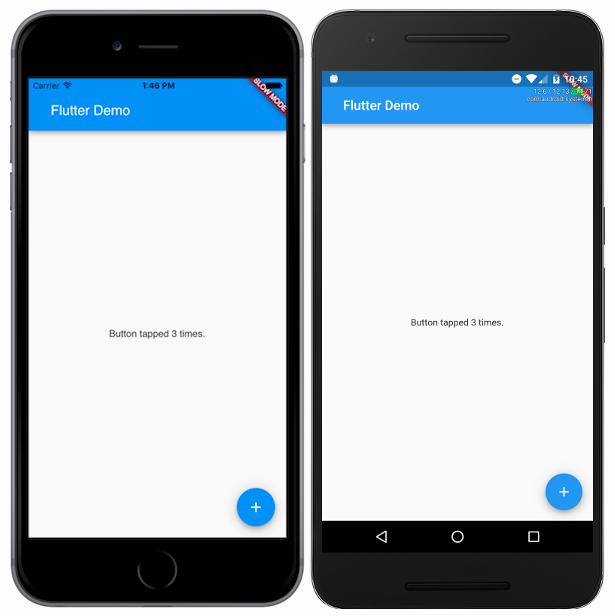 That’s all the code necessary to build this button tap counter app. Less than 100 lines of code, not counting the comments, to generate an iOS & Android app. If down the road you wanted to build native code into your app you can and with ease. I won’t get into that now. There’s one more part to my sales pitch about using Flutter for your own project.

Earlier I mentioned one of the neat things about Flutter was the way UIs were updated. How state changes cause widgets to be rebuilt and the differences are applied to the UI. If you have been doing Android development recently you might be familiar with the concept of hot reload. Flutter allows you to hot reload iOS apps. Here it is in action.

Flutter allows you to write iOS & Android apps with Dart. It may take a bit of learning to get used to coding in Dart if you haven’t done so yet but the concepts are pretty simple once you get the concept of widgets, stateful vs. stateless. One codebase to build two apps for different platforms is pretty powerful. In less than a minute you can create your first Flutter app and it’s definitely worth checking out. I’m looking forward to using it on a future project. Stay tuned.

As always, I hope this helps. If you’ve got any questions reach out to me on Twitter, Facebook or in the comments below.